This AEW Star is Forging His Own ‘Rhodes’ in Pro Wrestling 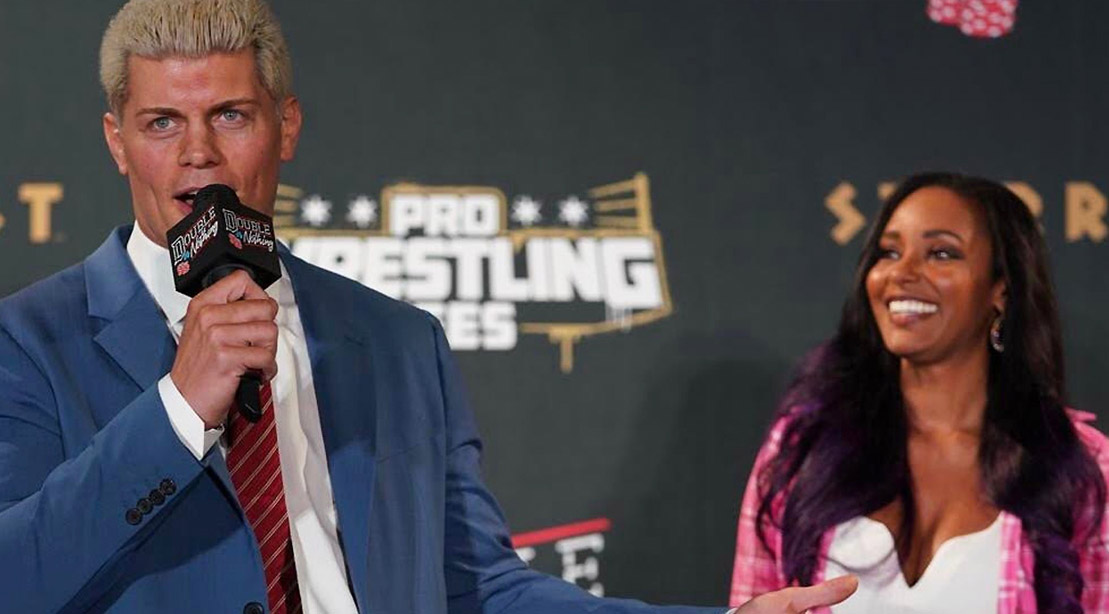 All Elite Wrestling star Cody Rhodes is “making it happen.”

As a performer, promoter, and soon-to-be father, Rhodes is making the most of every minute. With a new reality show on the way, and live audiences returning to AEW, the man from Marietta, GA, sat down for an exclusive chat with M&F to find out how he’s managed to carve his own identity while being part of such a warmly regarded pro wrestling family.

If you have a basic knowledge of pro wrestling’s legendary Rhodes family, you may be under the impression that Cody was always destined to follow in the footsteps of his heralded father Dusty, and his iconic older brother Dustin. But what you may not know is that unlike his relatives, Cody fell in love with amateur wrestling before he embarked on the pro side, and all this came about in a completely indirect way.

“I was 7 or 8 years old, and (getting into amateur wrestling) had nothing to do with my dad,” says Rhodes. “He didn’t know anything about folkstyle, freestyle, or basically Olympic-level wrestling. He only knew about it from other pro wrestlers, who’d had that discipline. When I was playing football, another dad suggested that I should wrestle to stay in shape for the football season. I tried it and found out that it was vastly different from the pro wrestling that I was seeing on TV, but I was hooked right out of the gate.”

Freestylin’ it at First

Far from being a natural, Rhodes admits that at first he “wasn’t good” at freestyle wrestling, but by the age of 14, it all started to click. “I had good technique, but I didn’t have any upper body strength,” he says. After persevering with strength training, including practicing his pullups, Rhodes eventually developed into the full package. “Once I was able to put the two things together, strength and technique, that’s where I really started to take off,” says Rhodes.

Rhodes’ memories of amateur wrestling are mostly fond, and it was a time that instilled the young man with great confidence, because it helped him carve out his own identity, separate from the revered pro wrestling legends in his bloodline. “It’s funny, being the son of a professional wrestler,” he says. “Although my dad never looked down on amateur wrestling, a lot of times I would visit these camps like the Ken Chertow Gold Medal Camp, or I’d go out of state for Team Georgia, and some of the parents would kind of raise their eyebrows at Dusty.”

In his sophomore year, Rhodes finished second in the Cobb County tournament, and the Region 6AAAAA tournament. Then, stepping away from football to focus on wrestling, the “grandson of a plumber” racked up an undefeated 18-0 streak at 189 pounds. He also won the Cobb Country title at this weight and furthered his record to 42-0, before winning the Georgia state title.

While Rhodes was deeply passionate about amateur wrestling, he was also aware of how hard it would be to make a secure financial living from the sport. “Beyond the world championships, and the Olympics, there really wasn’t a profitable vocation from folkstyle or freestyle wrestling,” he says. After his final match in senior year, Rhodes bowed out completely. Around this time, he’d been attending more and more pro wrestling shows, and felt ready to make the transition.

Cody says that having a background in another discipline can be beneficial when starting out in the world of pro wrestling. “It’s very helpful to have wrestling as a background, or jiujitsu for that matter,” he says. “Because a lot of pro wrestling is rooted in the idea of leveraging, and chain wrestling. When you watch guys like Verne Gagne and Billy Robinson, then you see.”

Now running his own pro wrestling school, known as the Nightmare Factory, Rhodes is eager to pass on the skills demonstrated by some of pro wrestling’s most respected technicians. “If you watch a guy like Fit Finlay, or Steven Regal, or Kurt Angle, even Larry Zbyszko, they continuously kept moving,” says Rhodes. “Whether they are trying to get a leg, or an arm, versus what we would just call ‘a high spot’ in pro wrestling.” The American Nightmare understands that hooking a leg is just an important to the presentation of a pro wrestling match, or maybe even more so, than a flashy dive from the top rope. “Kurt Angle being the greatest example of all,” he says. “Dolph Ziggler is another one, in terms of being able to apply his amateur skill.”

At AEW Double or Nothing, Rhodes defeated his student, the former professional boxer Anthony Ogogo in a match that showed great promise for the newcomer. It was an evening that touched the hearts of everyone on the roster. “I think ‘Double or Nothing’ cements itself as our largest event,” says Rhodes. “Everybody in the locker room really wants to be on Double or Nothing, and having the crowd back, and having them so close really effected the show in a touching way. To have people back is such a blessing.” With AEW growing from strength to strength (Watch AEW Dynamite on TNT), Cody’s time is already limited, but with his new unscripted series ‘Rhodes to the Top’ currently in production, he and his expectant wife, Brandi, have to be even more regimental about making time for health and fitness.

Now at age 35, Cody has a breadth of knowledge and experience to draw from when it comes to staying in shape. “Maintenance is huge,” he says. “I feel like I’ve been doing maintenance workout since I was 14 years of age, ever since someone first taught me to talk around and use the gym.”

“In amateur wrestling, you need that leg strength, that core, and upper-body strength,” says Rhodes. “And today, for pro wrestling, you can’t just have ‘show’ muscles any more like in the late ’80s and ‘9’s. Today, you have guys like Hangman Page who can put an opponent in a fallaway position, and do a full flip [holding] them. That takes genuine functional strength. When people get snippy with Brandi [also a wrestler] or I, and they say we are always in the gym, Brandi is always quick to remind them that it is part of our job.”

With Rhodes’ epic schedule, he makes sure to draw on the experts from Georgia’s Chip Smith Performance Center for his workouts. “We use a lot of the same workouts as guys that

are training for the combine,” says Rhodes. “The biggest things we have implemented lately is the VertiMax, for jump work. Its helped me a lot.”

“When I feel like I wanna get in there and really embody a pro wrestler, and the spirit of it all, I’ve gotta lift heavy,” he says. “I like to train with Preston Vance (known a ‘10’, in AEW’s Dark Order faction). He’s a big lifter and it becomes a classic contest between us guys. John Cena was somebody who was one of my inspirations, watching him fit those frequent gym sessions in, and he was always a heavy lifter on everything, so I try to bring that with me.”

Rhodes to the Future

With a camera crew gearing up to begin filming at Cody and Brandi’s house, and a baby on the way, staying on top of everything is essential for his future success. AEW is back on the road, and even eyeing up international tours, so how does our man keep his sanity? Does he thrive under pressure? “I don’t know if I thrive off it, so much as its just helpful if you don’t really take a day off,” he laughs. “I actually like that. It keeps me going, and it keeps me ‘on.’ It’s easier if the train keeps on going!”

(1) Howard Sent You A Message…

6 Ways To Strategically Stress Your Body Out For Longevity & Immunity

What Are the Benefits of Using Kinesiology Tape?